Groove announced a new version of Suigintou via their blog earlier this morning. Suigintou is from the anime Rozen Maiden, Jun Planning previously collaborated with Rozen Maiden to make a series of dolls starting back in 2006 it was the first major anime collaboration for Pullip. So far this year, of the fifteen dolls announced and/or released only six of them are original dolls ie. not collaboration and of those six one looks like an unofficial collaboration and one of the others is a recolor of a previously released doll.

Collaboration dolls are great in moderation but I remember at the time of the original Rozen Maiden’s series release that a lot of people in the community seemed upset that so many collabs were released and dominated most of the release dates for the year, now here we are again six years later. Is Groove going to re-release the entire series? Given how long some of the dolls took to sold out that doesn’t seem wise on their part especially since at least one of the dolls Hina Ichigo is still available nearly eight years after release. Personally, I love Rozen Maiden and it’s what got me into Pullips but I think I’d rather see new original releases. 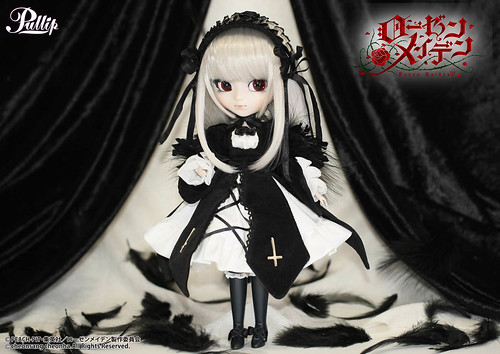 She has a MSRP of 16000 yen (the original had a MSRP of 12000 yen). While she does look more detailed than the original, she does not appear to come with any accessories unless of course you order through TBS where you get a bonus feather if you order before the 20th of April. The original came with a sword. 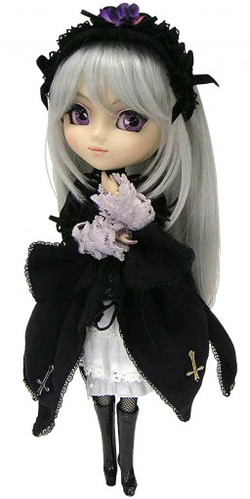 I’ll be sure to update as soon as more photos become available. Currently she is only available for preorder via TBS. TBS is the official goods shop of Rozen Maiden so at this time I assume that like Sparrow and Shinku, Suigintou will not be exclusive to them but they seem to have the right to list her for preorder first.

Like Loading...
This entry was posted in Doll, Pullip and tagged Pullip, rozen maiden, suigintou. Bookmark the permalink.