Pullip Nine-Tailed Fox Kumiho was announced a while ago by Groove via their blog but I am only now having a chance to focus my attention on writing about her here. Pullip Kumiho is going to be released in February of next year in Japan, she will be released one month later here in the US. She has a MSRP of 23000 yen which is about $203 as of this writing which may seem expensive for a non-collaboration doll but she is definitely one of the most ambitious Pullips released to date so I feel like the hefty price tag is more than warranted.

Pullip Kumiho which literally translates to mean Nine-Tailed Fox in Korean is inspired by the Nine-Tailed fox spirit of Asian legend, the spirit is said to mischeivious and is known to shapeshift preferring to take the form of a beautiful woman either for mischeivious purposes or sometimes more murderous intent depending on the legend.

Previously a nine tailed fox prototype had been spotted at the 15th Pullip 15 ♥ Anniversary ~ starry sky of the Dream event at the Yokohama Doll Museum earlier this year while I was excited by the prototype but had also kind of wrote her off as probably not something that was likely to be released due to the complexity of her design or perhaps she would be too costly to produce. I was honestly kind of surprised that she didn’t end up as being even more pricey, I can’t wait to see pictures of her in the box as she probably requires a larger box to accomodate her.

(Also would be okay with either of the two dolls seen beside her getting a release eventually especially the green/blue themed doll). 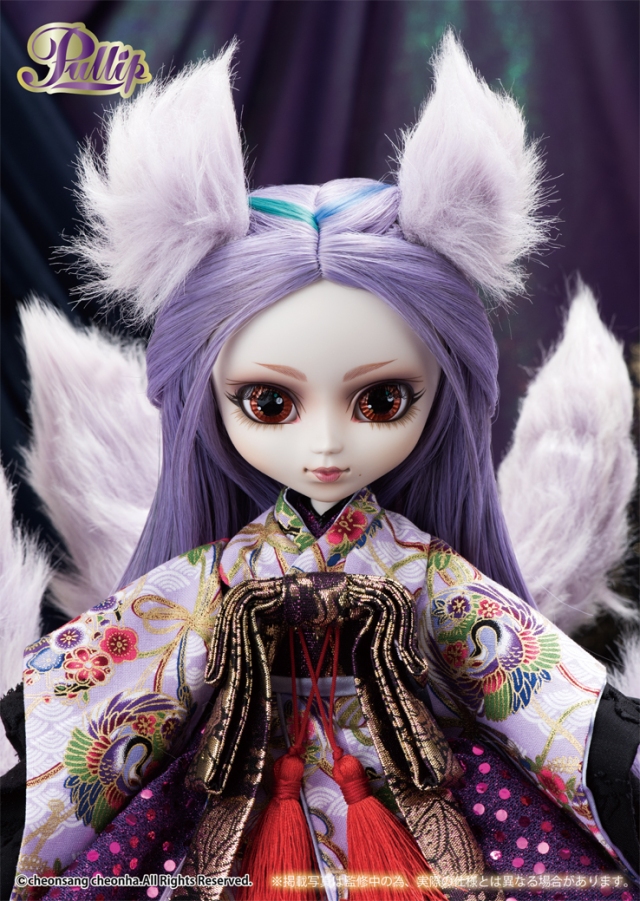 It’s honestly been a while since I have seen a Pullip release that has wowed me as much as Kumiho, her promotional photos really blew me away as she is just spectular. Normally there is a few small things I wish could be changed with virtually every release but she is just perfection, whoever designed her did a fantastic job and I hope we see more outstanding releases like this in the future!

Honestly, I always feel like we don’t have enough purple themed Pullips it’s a color scheme we don’t see that often so I love the palette that was chose for her. I love the pops of contrasting color in her wig (she appears to have a blue and a green streak) and the fabric choices are pitch perfect, I love how dramatic the pops of red on her outfit are.

Wow that face up! Kumiho has really intense eye make up, I love the way that the eyelashes kind of feather. I love the expression that her eyebrows give her but I think most of all I love her lips!  Her lips are shaped in a very unique way and are painted very differently than what we normally see on Pullip!

Kumiho has an intense and otherworldly presence. This a doll that will definitely stand out in almost any collection she is not a shrinking violet that may blend in with other releases she definitely will have shelf presence!  One of the things that initially attracted me to Pullip was the variety of releases, when I first started collecting collaborations weren’t as prevelant and each doll for the most part had a strong unique vision in more recent years I feel like for a variety of reasons (after so many years, I’m sure it’s admittedly harder to create unique dolls that don’t remind us of a previous release and there have in general been a lot more collaboration releases) but Kumiho definitely shows a unique vision and in general so far late 2018- early 2019 seems to be off to a great start and has definitely renewed my interest in Pullip.

The only negative thing about dolls like Kumiho is they may not have as much mass appeal as say for instance a collaboration with a Lolita company like Baby, the Stars Shine Bright but I feel like the key for overall Pullip fandom happiness is to do a variety of releases not every doll is going to fit into every collection. Dolls like Kumiho may not appeal to someone if they only collect BtSSB or Sailor Moon collaboration dolls but there are other collectors who aren’t as fond of all the collaboration releases and long for original releases the key is balance and variety to hopefully reach and attract as many fans of Pullip as possible. All the feedback I’ve seen from other Pullip fans about Kumiho has been pretty universally postive, the only negative criticism I’ve really heard basically boils down to omg she is going to take up a huge amount of space on the shelf! 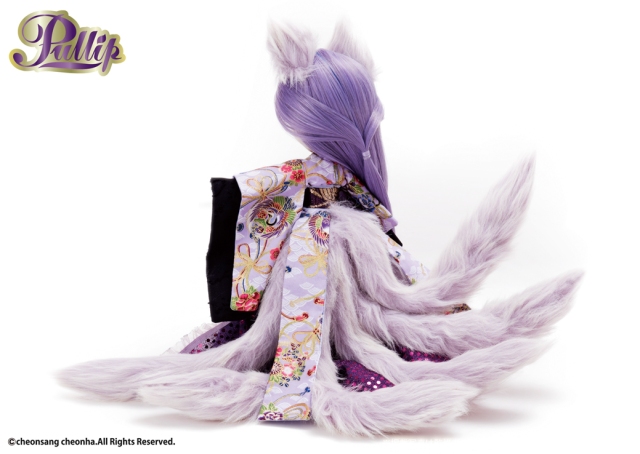 Back view so all the tails can be seen. 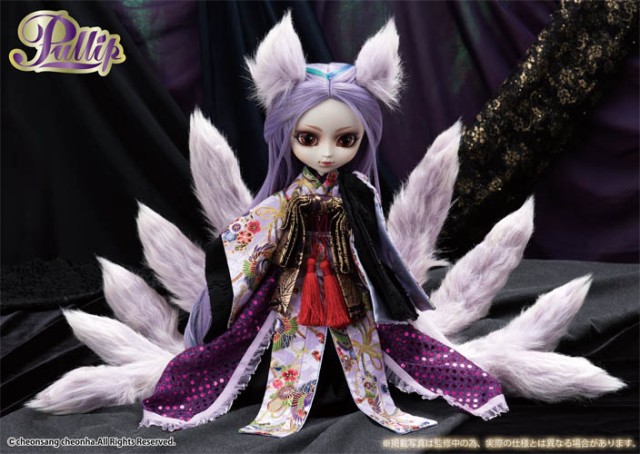