I hope you are ready for something a little bit different from me today! Normally I focus on collecting Asian fashion dolls such as Pullip or Blythe, while I do collect some playline dolls such as Monster High dolls but American fashion dolls rarely seem to interest me though I do own the Tonner Harley Quinn doll as well as a random Desperate Housewife Tonner doll  that I had found for dirt cheap at TJMaxx of all places. I recently discovered that Madame Alexander had launched a new line of dolls in fall of 2016 that are based on fashion forward versions of popular DC Comics heroes & villains though the first three dolls in the line are villains: the Penguin, Joker and of course my favorite DC villain Harley Quinn.

Admittedly, I had never really paid much attention to Madame Alexander before and my discovery of the dolls existence was a bit happenstance as I recently bought a few new statues of Harley Quinn and the Madame Alexander Fashion Squad Joker showed up as a suggested item which immediately caught my attention. When looking at the Joker’s listing I discovered that dolls of Harley Quinn and the Penguin also existed,  I put Harley Quinn and Joker on my Amazon wishlist hoping to someday acquire at least one if not both dolls eventually. I loved them both but their MSRP of $279.95 each was definitely a stumbling block then about a week after I discovered them, I received an email from Amazon advising me that Harley Quinn was to be a lightning deal exclusive to prime members later that day, haha what luck! I ended up paying about $115 for Harley Quinn after tax, which I thought was much more reasonable I can only hope to get this lucky with the equally lovely Joker doll! 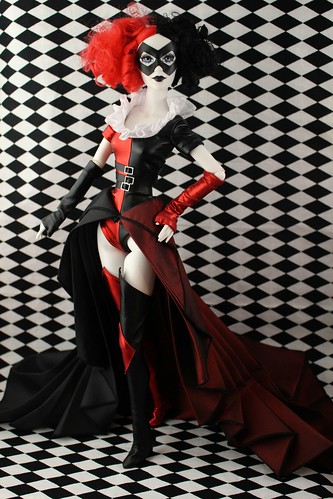 I looked for owner photos of the dolls from this series but my search was mostly fruitless, I did have several people on facebook request that I post a review of her here when I posted about ordering her so here goes….

I ordered Harley Quinn on Saturday and she arrived on Monday but I have to admit that I was pretty disappointed by Amazon’s packaging effort for Harley Quinn, seriously just one thing of bagged air is supposed to keep her safe? Thankfully she miraculously arrived unharmed but I did follow up and leave feedback on Amazon regarding how they packaged her because it was in my view unacceptable. 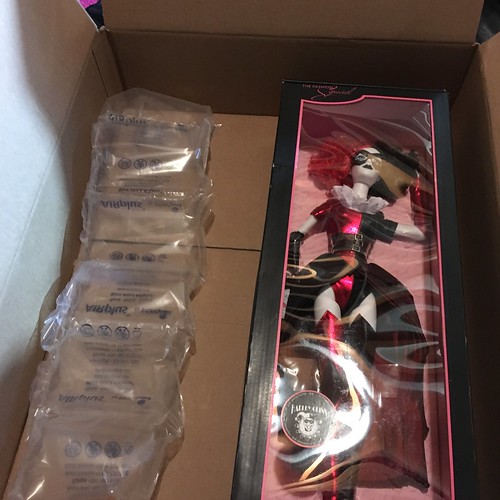 My initial impression was wow she is gorgeous, quickly followed by holy hell she is bigger than I expected. I knew she was going to be 16 inches tall but knowing how tall she is supposed to be versus seeing it in person I was still shocked by just how big she was. 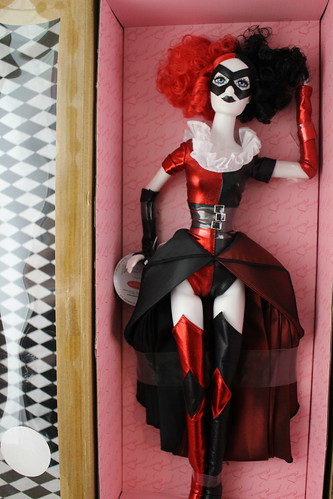 Harley Quinn in the box! Her stand was hidden behind the box liner. 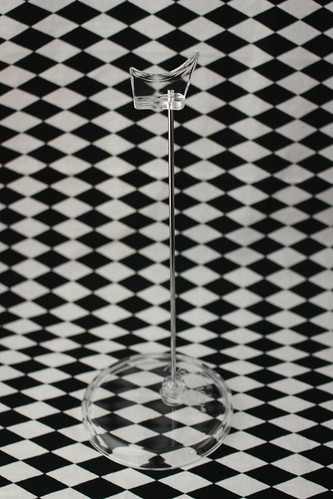 Harley Quinn came with a saddle stand, I was kind of impressed that she didn’t always need it I managed to get her to stand self supported without too much difficulty even though she is wearing heels. 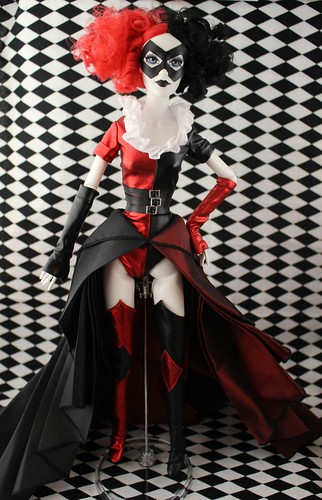 Saddle stands are designed to fit between the doll’s legs, though I’m familiar with the concept I believe this is the first saddle stand I have actually owned so I wanted to include a picture of her on the stand to illustrate it’s use. 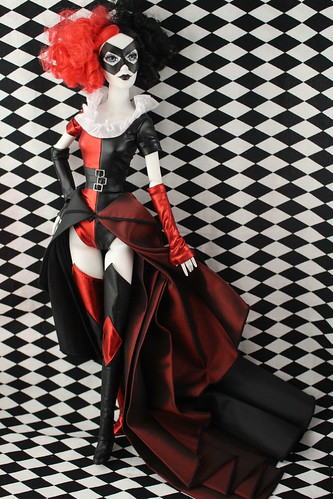 Comic book characters have a style that is constantly evolving, for better or worse each artist and/or writer have their own interpretation of a character Harley Quinn in particular has gone through a number of different revisions through the years and has gone through a wide variety of costumes. Looking at this doll it is most definitely Harley Quinn, maybe not the iconic clown jester outfit that was introduced in the animated series so many years ago but it does have elements that are very true to her original design. She still has the alternating red/black color scheme, the mask, the diamonds on the knees are reminiscent of the diamonds on her original outfit and the ruffle around the bustline is quite a bit like her clown ruffle around her neck in her original outfit. She still has milky white skin and pigtails which her hair has traditionally been pictured as underneath the jester hat and while the color is quite radical it does continue with the alternating red and black color scheme. 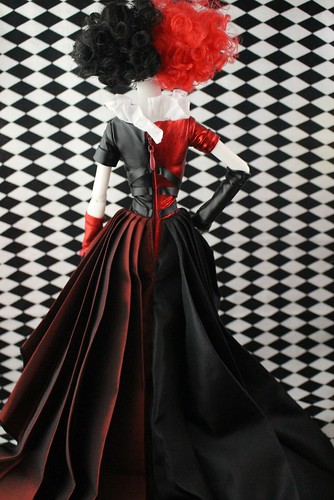 Back view of the dress, both the dress and the boots have zippers for closure. I was unfamiliar with Madame Alexander dolls so I honestly wasn’t sure what to expect in terms of clothing quality but I must say that I was really impressed with her outfit. Her knees and one of her elbows came wrapped in plastic I’m unsure if this was to help prevent staining or if it was to help preserve the joints either way it was easy enough to remove. 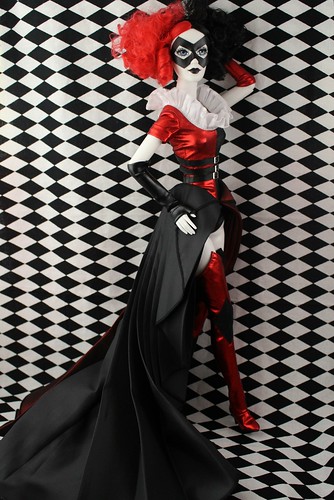 I am still impressed that I was able to get her to stand by herself unaided, I wouldn’t think the heels on the boots would really be enough to support her. Maybe, I’m too used to top heavy Pullips that generally do not like stand on their own. 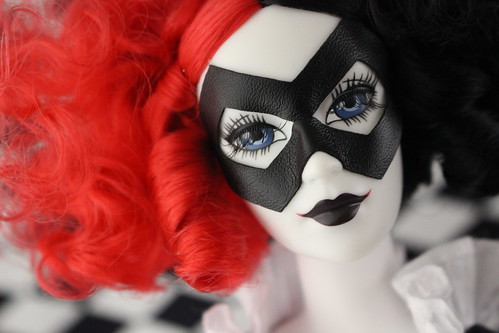 I was curious about Harley Quinn’s mask, how it was held on and whether or not it was removeable it turns out it is actually glued directly unto the doll so it is not easily removed (I’m okay with that!). She has a really nice face up, she is one of my few dolls that have actual eyelashes with painted eyes it is a bit of an unusual combination but it works for her. I love how the corners of her mouth have just a little bit of red on the edges, it gives just a hint of color to her face up. 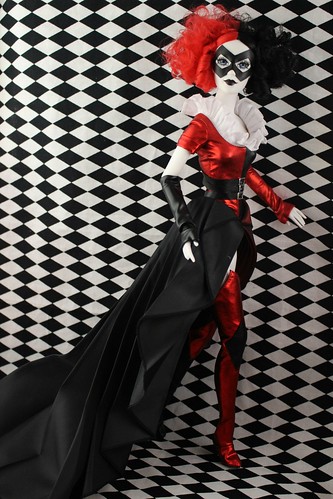 I love this high fashion version of Harley Quinn! Some of Joker’s schemes make sense only to himself, I could almost see him sending Harley Quinn to infiltrate a high end fashion show what’s the motive? Perhaps the designer upset the Joker in some way or perhaps Joker and Harley Quinn wanted to rob the presumably well off audience. 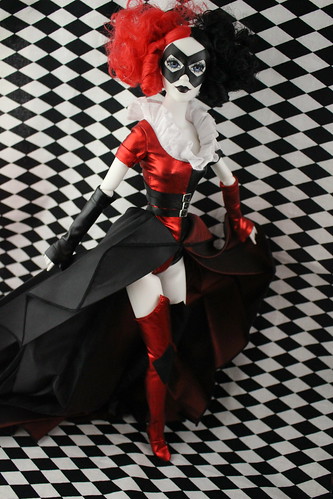 The train of her skirt was really something, not to mention incredibly fun to play with in photos. 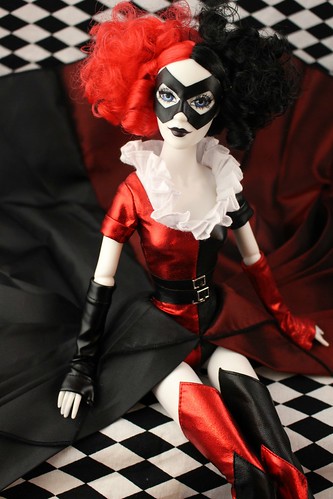 This last photo was partially inspired by a common style of bridal photo where the train of the wedding gown gets splayed out behind the bride and is used as a background. 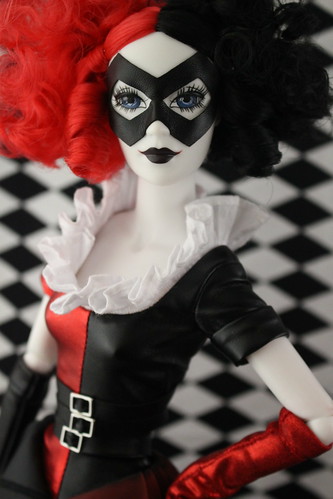 Some additional photos of the Madame Alexander Harley Quinn can be seen on my flickr. I hope you have enjoyed this look at Harley Quinn, hopefully someday I will be able to feature the Joker doll from this line as well. 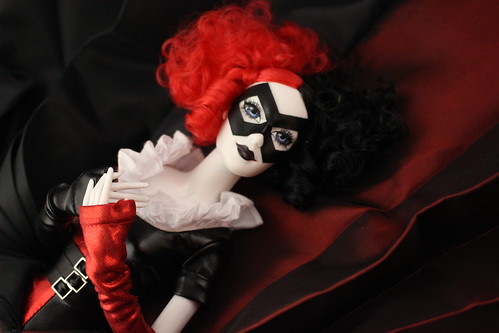