Hestia dolls are a line of dolls by Jun Planning that were released from 2006 to 2007. Hestia dolls were designed with the idea that the two characters Ribon and Isora were 15 year old twins, they had the same face sculpt/bodies and eyes but each of the twins had their own personality. Ribon and Isora were simultaneously released in phases with each phase having a different theme, Ribon and Isora would each have their own unique interpretation of the theme. Elder sister Isora tends to dress more gothically while younger sister Ribon tends to dress more sweetly preferring the lolita style. 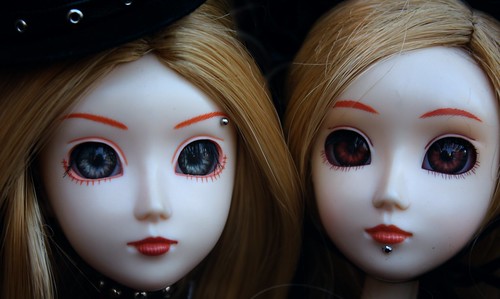 Only ten Hestia dolls were released before the line was discontinued, two additional models were announced but never released. Not much information was known about the final two models there was speculation over whether or not they had been released or not. After years of having never found the final two for sale or owner photos of either doll I finally gave up and emailed Groove, they confirmed the releases had been canceled.

Hestia dolls are approximately 11 inches tall. All Hestia dolls came on the Type 3 Pullip body which was also used on Pullip from 2005-2008 and J-doll from when she introduced in 2007 through 2008. Above is a comparison between a Type 3 Pullip, a Hestia and a J-doll although the head sizes are quite different they all use the same body.

Where to buy:
JPGroove has a small selection of Hestia dolls available for sale via their website.